At the annual GRETB awards night several Coláiste students were among the recipients who were recognised for their achievements throughout the year. Galway and Roscommon Education and Training Board (GRETB), in association with Bank of Ireland, hosted the 2nd Annual Awards presentation in the Raheen Woods Hotel, Athenry last April. 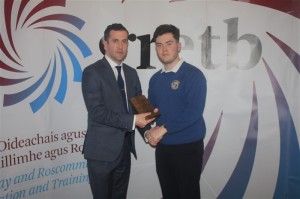 Michael is a Leaving Certificate student at Coláiste an Eachréidh. During his 6 years at the Coláiste he has been an outstanding student, chairperson of the Coiste Gaeilge, Student council member, captain of All-Ireland winning  volleyball team and the recipient of numerous school-based awards. This award recognises and acknowledges the fact that Michael has be present every single day for 6 years – 100% perfect attendance 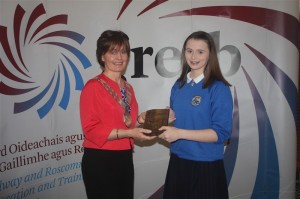 Kathleen Shanagher, Chairperson GRETB Board presents an award to Leaving Certificate student and 2017 BT Young Scientist Award winner, Ciara-Beth Griffin who, on the strength of the App she developed for young people with autism, was selected as one of 33 global teens taking global issues in their own hands. The group convened in New York City for a week in March, on an all expenses paid forum by Three Dot Dash.  (http://www.threedotdash.org/2018-global-teen-leaders) 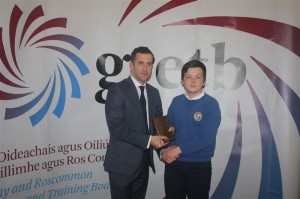 Damien Gardiner, Community Banking Leader, BOI Galway City makes a presentation to Oisín a TY student who qualified among the top 100 pupils in Ireland  for the National AILO finals. Oisín was also a member of the Coláiste CHESS team which won the Connaught U19 Shield earlier this year. He also had a major part in the TY musical BACK TO THE 80’s 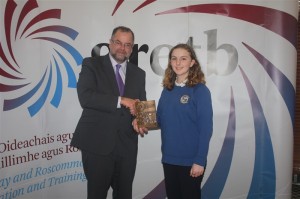 Sadhbh Goodwin accepts the award from GRETB’s Director of Schools, Tomás Mac Pháidín, on behalf of the OILEÁN GROUP (Seán de Faoite, Leah Ní Mhuirgheasa, Mollaí Ní Fhoghlú, Oengus Ó Corcora, Sadhbh Goodwin, Eileen-Roisín Cloonan, Deirdre Nic Amhaill & Hazel Ní Bhroin) Indeed, last it was a honor to see 8 of our pupils at Poetry Ireland’s offices in Dublin in February. They, and pupils from one other school, were greeted by the former Irish-American ambassador Anne Anderson and had the opportunity to recite their poems at a wonderful event sponsored by Poetry Ireland.To their delight, the pupils were presented with a bound copy of their very own published works by the former Ambassador, who had commissioned the work through the Oileán Programme. 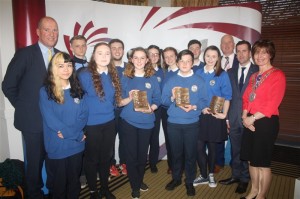