Writing Talent in Coláiste an Eachréidh

In Coláiste an Eachréidh, language is of paramount importance. We emphasise the significance of our national language, Gaeilge, everyday as we speak it, sing it and hear its beautiful musicality echo around the school. But Béarla / English is also highly valued and nurtured. Our students have excelled this year both at school and on a national level. Again this year we are delighted to announce that two of our Transition Year students, Sadhbh Goodwin (Persephone) and Eileen Cloonan (HALCYON part II), were successful in the Leitrim County Council annual writing competition “Wild Words”. From hundreds of entries they were chosen to be among the 30 young people whose work was,published in this year’s edition of the anthology of writing. The girls also were awarded the opportunity to attend various writing workshops over the summer as they hone their writing skills. Their poems are beautifully constructed and well worth a read. Well done girls. Comhghairdeas.

Gráinne Nic Amaill is a fifth year student with a great interest in writing. During her Transition Year she focused on the creative process and worked at honing her craft. The rewards are plain to see. Two of Gráinne’s short stories, “The Fighter” and “Love the Life You Live”, were published in a national publication “Wild Words” this summer. Of the many hundreds of entries in the writing competition Gráinne was the only one to have two stories selected for publication. She was invited to attend a writer’s workshop at the Children’s Literature Festival in Carrick on Shannon where she met with other writers to celebrate her success and work at further developing her creative writing. Love the Life you Live Grainne Hamill The Fighter Gráinne

Amy Nic an Chrosáin is a third year student in Coláiste an Eachréidh. Although studying for her Junior Cert. Amy is still dedicated to her writing. Amy’s story “Dear Summer” was selected to be published in “Future Tense – An Anthology of Young Galway Writers”. At the book launch in the Radisson Hotel in Galway Amy was invited on stage to read her work to a captivated audience. Dearest Summer Amy Nic an Crossan Ciarán Mac Choncarraige and Meabh Nic Chrosáin are Leaving Cert. students in Coláiste an Eachréidh. 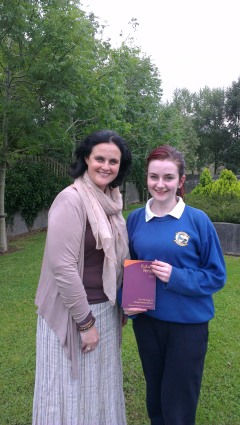 Their teachers and fellow students applaud them as inspirational poets presently attracting national acclaim for their individual bodies of work. They have been singled out as “Stars” by the editor of “The Floor Magazine”. Ciarán Mac ChoncarraigeCiarán’s poem “One Cent Coin” won the presitigious, national “Cuisle – Young Poet of the Year ” Award of 2014. His poem “Ribs” was published in Wordlegs, his poems “little lady” and “Eyelashes” have been published in “The Floor Magazine” and Boyne Writers Group have selected his poem “Cartwheels” for publication in their September edition. Ciarán’s work is diverse and evokes a depth of thought rare in a poet so young.

His poem “Ribs” was published in Wordlegs, his poems “little lady” and “Eyelashes” have been published in “The Floor Magazine” and Boyne Writers Group have selected his poem “Cartwheels” for publication in their September edition. Ciarán’s work is diverse and evokes a depth of thought rare in a poet so young.